Synthetic biologist Tom knight said, “The 21st century will be the century of engineering biology.” He is one of the founders of synthetic biology and one of the five founders of Ginkgo Bioworks, a star company in synthetic biology. The company was listed on the New York Stock Exchange on September 18, and its valuation reached US$15 billion.
Tom Knight’s research interests have undergone a shift from computer to biology. From the time of high school, he used the summer vacation to study computer and programming at MIT, and then also spent his undergraduate and graduate levels at MIT.
Tom Knight Realizing that Moore’s Law predicted the limits of human manipulation of silicon atoms, he turned his attention to living things. “We need a different way to put atoms in the right place… What is the most complex chemistry? It is biochemistry. I imagine that you can use biomolecules, such as proteins, which can self-assemble and assemble within the range you need. crystallization.”
Using engineering quantitative and qualitative thinking to design biological originals has become a new research method. Synthetic biology is like a leap in human knowledge. As an interdisciplinary field of engineering, computer science, biology, etc., the start year of synthetic biology has been set as 2000.
In two studies published this year, the idea of circuit design for biologists has achieved the control of gene expression.
Scientists at Boston University constructed a Gene toggle switch in E. coli. This model only uses two gene modules. By regulating external stimuli, gene expression can be turned on or off.
In the same year, scientists at Princeton University used three gene modules to achieve the “oscillation” mode output in the circuit signal by using the mutual inhibition and release of inhibition between them.

Gene toggle switch diagram
Cell Workshop
At the meeting, I heard people talk about “artificial meat.”
Following the computer conference model, the “unconference self-organized conference” for free communication, some people drink beer and chat: What successful products are there in “Synthetic Biology”? Someone mentioned the “artificial meat” under Impossible Food.
Impossible Food has never called itself a “synthetic biology” company, but the core selling point that distinguishes it from other artificial meat products-the hemoglobin that makes vegetarian meat smell unique “meat” comes from this company about 20 years ago. Of emerging disciplines.
The technology involved is to use simple gene editing to allow yeast to produce “hemoglobin.” To apply the terminology of synthetic biology, yeast becomes a “cell factory” that produces substances according to people’s wishes.
What makes the meat so bright red and has a special aroma when it tastes? Impossible Food is considered to be the rich “hemoglobin” in meat. Hemoglobin is found in various foods, but the content is particularly high in animal muscles.
Therefore, hemoglobin was chosen by the company’s founder and biochemist Patrick O. Brown as the “key condiment” for simulating animal meat. Extracting this “seasoning” from plants, Brown chose soybeans that are rich in hemoglobin at their roots.
The traditional production method requires direct extraction of “hemoglobin” from the roots of soybeans. One kilogram of “hemoglobin” requires 6 acres of soybeans. Plant extraction is costly, and Impossible Food has developed a new method: implant the gene that can compile hemoglobin into yeast, and as the yeast grows and replicates, hemoglobin will grow. To use an analogy, this is like letting goose lay eggs on the scale of microorganisms. 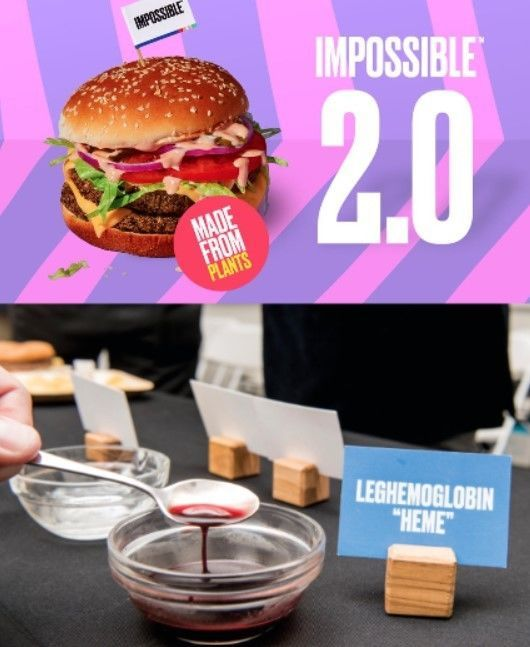 Heme, which is extracted from plants, is used in “artificial meat” burgers
New technologies increase production efficiency while reducing the natural resources consumed by planting. Since the main production materials are yeast, sugar, and minerals, there is not much chemical waste. Thinking of it, this is really a technology that “makes the future better”.
When people talk about this technology, I feel that this is just a simple technology. In their eyes, there are too many materials that can be designed from the genetic level in this way. Degradable plastics, spices, new drugs and vaccines, pesticides for specific diseases, and even the use of carbon dioxide to synthesize starch… I began to have some concrete imaginations about the possibilities brought by biotechnology.
Read, write, and modify genes
DNA carries all the information of life from the source, and it is also the source of thousands of traits of life.
Nowadays, human beings can easily read DNA sequence and synthesize DNA sequence according to design. At the conference, I heard people talk about the CRISPR technology that won the 2020 Nobel Prize in Chemistry many times. This technology, called “Genetic Magic Scissor”, can accurately locate and cut DNA, thereby realizing gene editing.
Based on this gene editing technology, many startup companies have emerged. Some use it to solve the gene therapy of difficult diseases such as cancer and genetic diseases, and some use it to cultivate organs for human transplantation and detect diseases.
A gene editing technology has entered commercial applications so quickly that people see the great prospects of biotechnology. From the perspective of the development logic of biotechnology itself, after the reading, synthesis, and editing of genetic sequences have matured, the next stage is naturally to design from the genetic level to produce materials that meet human needs. Synthetic biology technology can also be understood as the next stage in the development of gene technology.
Two scientists Emmanuelle Charpentier and Jennifer A. Doudna and won the 2020 Nobel Prize in Chemistry for CRISPR technology
“A lot of people have been obsessed with the definition of synthetic biology… This kind of collision has occurred between engineering and biology. I think anything that results from this has begun to be named synthetic biology.” Tom Knight said.
Extending the time scale, since the beginning of the agricultural society, humans have screened and retained the animal and plant traits they want through long cross-breeding and selection. Synthetic biology starts directly from the genetic level to generate the traits that humans want. Right now, scientists have used CRISPR technology to grow rice in the laboratory.
One of the organizers of the conference, Qiji Founder Lu Qi said in the opening video that biotechnology may bring extensive changes to the world just like the previous Internet technology. This seems to confirm that Internet CEOs all expressed interest in life sciences when they resigned.
Internet bigwigs are all paying attention. Is the business trend of life science finally coming?
Tom Knight (first from left) and four other Ginkgo Bioworks founders | Ginkgo Bioworks
During lunch, I heard a piece of news: Unilever said on September 2 that it would invest 1 billion euros to phase out fossil fuels in clean product raw materials by 2030.
Within 10 years, the laundry detergent, washing powder, and soap products produced by Procter & Gamble will gradually adopt plant raw materials or carbon capture technology. The company also set aside another 1 billion euros to set up a fund to fund research on biotechnology, carbon dioxide and other technologies to reduce carbon emissions.
The people who told me this news, like me who heard the news, were a little surprised at the time limit of less than 10 years: Will technology research and development to mass production be fully realized so soon?
But I hope it will come true.